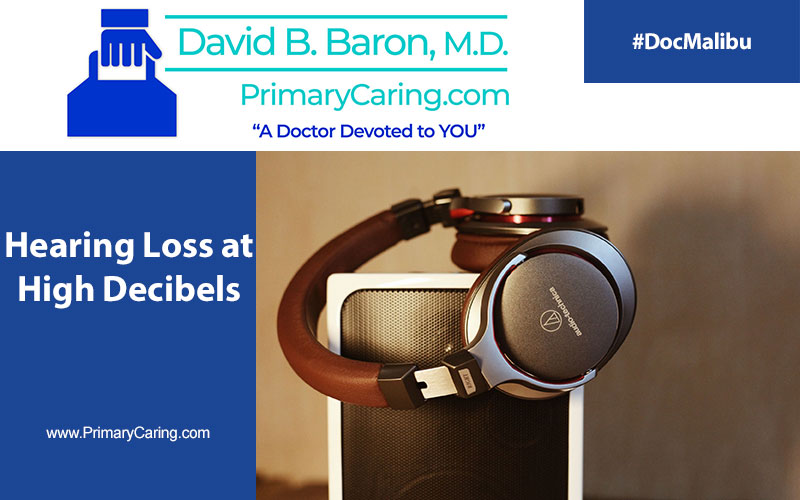 By David Baron
Can you hear me now?
No? How about now?
Still no good?

High-frequency hearing loss, a direct result of literally being too close to whatever it is you’re listening to, is the single largest contributor to a growing problem among young people.
Listen to the entire article here:
According to a 2010 study in the Journal of the American Medical Association, the prevalence of hearing loss in U.S. adolescents ages 12-19 increased significantly from 14.9 percent in 1988-1994 to 19.5 percent in 2005-2006. Hearing loss is permanent, caused by acoustic trauma to highly specialized cells in the inner ear from prolonged or repeated exposure to high levels of noise. What matters is the intensity, pitch and duration of the sound that the delicate little cells in your ear are experiencing and how much is too much.
We measure loudness, or the intensity of sound, in units called decibels.
There are actually government standards that define and regulate allowable noise
exposures based on decibel levels. There are also limits to how much noise you can make before being cited for violations of state or city ordinances and campus policies, not to mention irritating your neighbors to the point where they report you
The decibel level your ears experience is a function of primarily two things: the intensity of the sound being generated by and at its source and how far away from it your ears are. Another factor is the medium through which the sound is traveling. Have you figured out where I’m headed yet? Headphones, baby – earbuds included. (You might even have a couple of those little wireless buds in your ears right now.) Followed closely by loudspeakers. You may have heard the general rule that if the person next to you can hear the music coming out of your headphones, it’s too loud. That may cover the common courtesy aspect of appropriate loudness, but it’s not very scientific. Different types of headphones do better or worse jobs of isolating the sound for the intended listener. So let’s get down to the dirty decibel details here. It’s nearly correct to say that the faintest sound a human ear can detect is zero decibels. At the other end of the spectrum is the noise level at a rocket pad during launch, about 180 decibels. Normal conversation is 60 decibels, lawnmowers and truck traffic are about 90 decibels, and car horns and loud rock concerts 115 decibels.
I honestly don’t expect people to stop using their headphones or stop going to clubs, concerts, or living and working in noisy cities, near airports, etc. So the practical things you can do now that you’re aware of the issue and its implications for your health and hearing are pretty simple:
Ringing in the ears or headaches after loud noise exposure means it was too much and will gradually lead to hearing loss. Sharp pains in the ears during high decibel level exposure means the damage is happening now, and you’d better turn down the volume, or turn your back to the loudspeakers and start walking in the opposite direction

At Primary Caring of Malibu we have returned to old-fashioned style family medicine to bring our patients the exclusive personal care and attention they deserve. It’s not a new idea — it’s just an old concept brought up-to-date, with modern methods and technology making it even better.